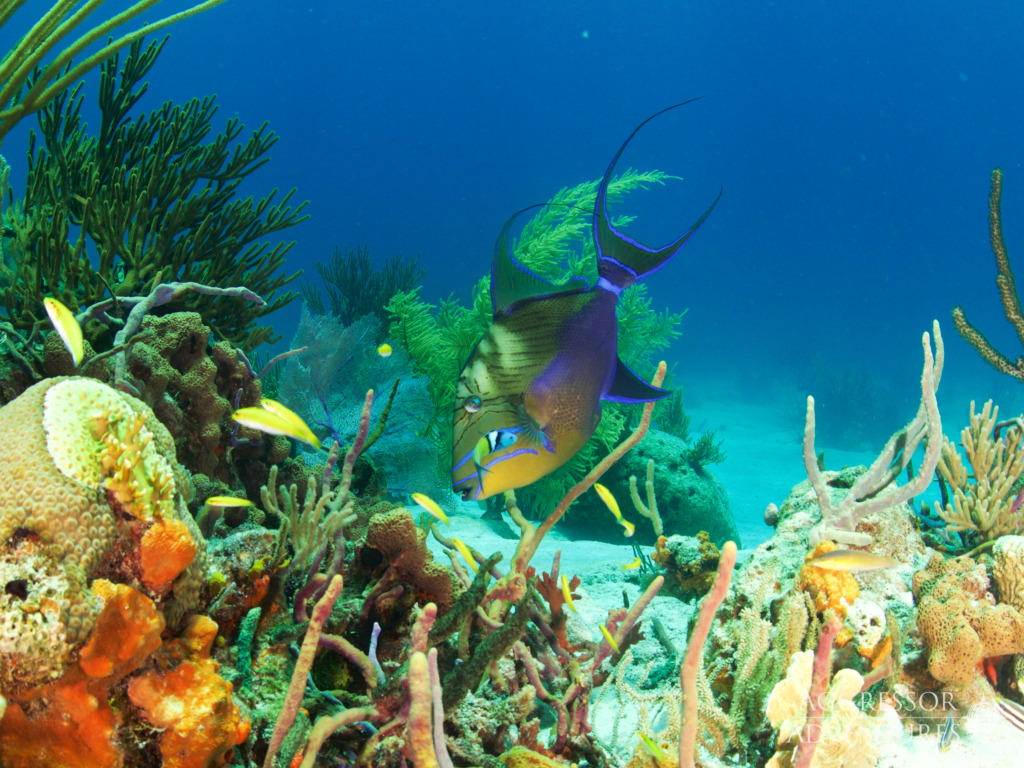 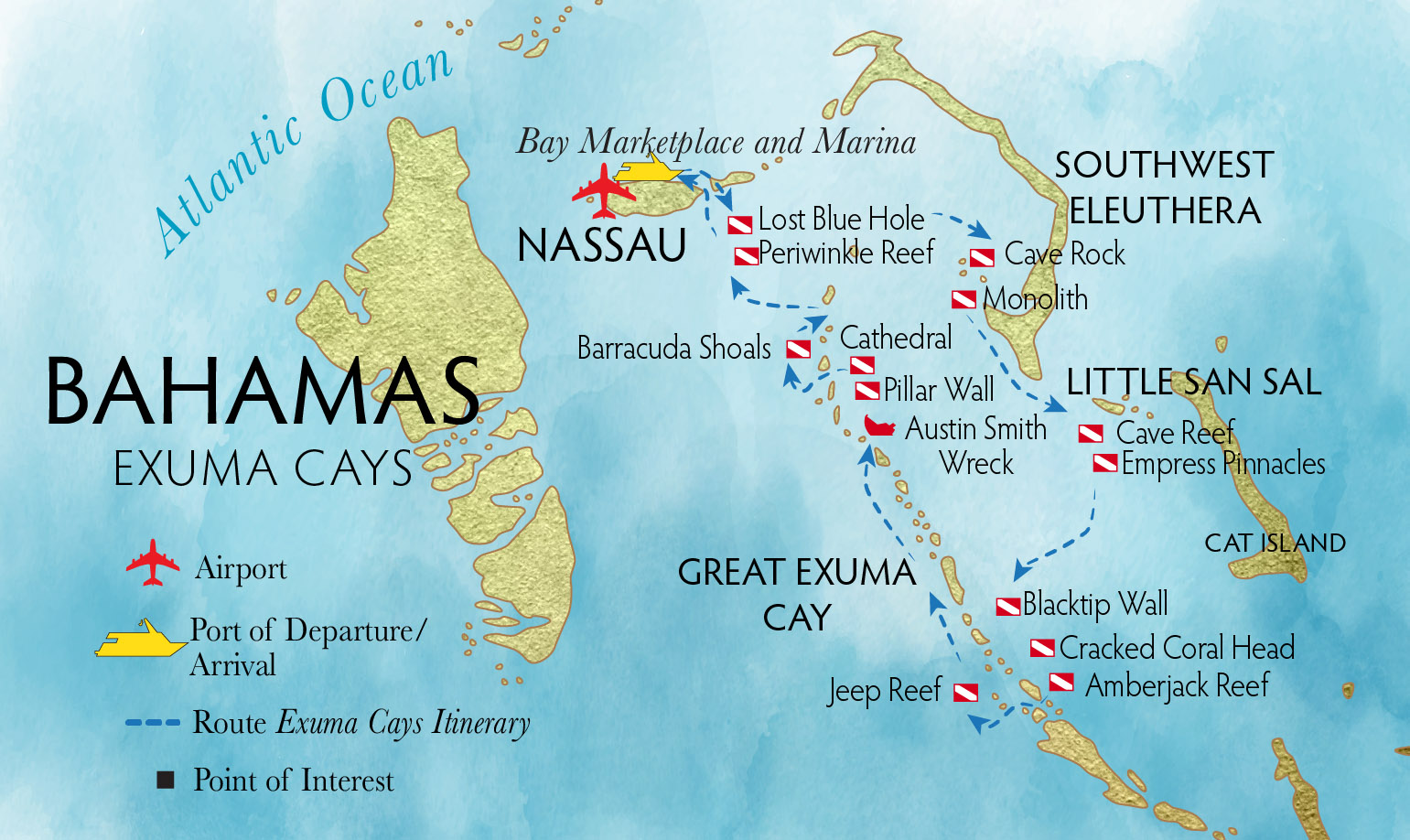 The Exumas archipelago comprises more than 350 small islands and cays stretching over 120 miles from just south of new Providence to the anchor islands of Great and Little Exuma to the south. The Exuma Cays are a part of the more remote Out Islands of the Bahamas. The Cays are the most exotic of these islands, a collection of sandy jewels set in the aquamarine and sapphire of some of the most beautiful waters in the world along with an intriguing combination of walls and rich shallow reefs.

Lost Blue Hole: The rim of this large blue hole lies in 40′ of water surrounded by coral heads, stingrays, and many schools of fish. There is a lobster filled crevice at 80′. In the sand surrounding the hole, divers find many small fish such as banded jawfish, Seminole gobies, and tobacco fish. There are usually one or two nurse sharks and during the spring a large school of blacknose sharks inhabits the bottom of the 200′ hole.

Periwinkle Reef: This is a shallow patch-reef teaming with fish. The local Nassau tour operators feed fish here, so sergeant majors and angelfish approach scuba divers looking for a handout.

Amberjack Reef: This 50′ patch-reef that has prolific fish life including reef sharks and up to ten large groupers. This dive also has many interesting small critters such as pirate blennies and garden eels. During the safety stop divers may be surrounded by 100+ horse-eye jacks that school under the yacht.

Austin Smith Wreck: A 90′ Bahamian Defense Force cutter lying in 60’ of water that, ironically, sank in 1995 while being towed to San Salvador to be sunk there as a dive site.

Barracuda Shoals: This bankside patch reef has huge schools of fish as well as many small critters on the reef and surrounding sand.

Blacktip Wall: Hammerhead sharks have been sighted frequently on this wall. This reef is also where Ned Deloach (the popular Reef Identification books co-author) discovered the rare Lemon goby.

Cathedral: This site is part of the Dog Rocks Reef. This reef starts at 35′ and slopes off to 50′ before dropping straight down into the Exuma Sound. The “cathedral” is a large swim-through where light filters down from above reflecting off thousands of silversides. This swim-through also has many groupers and jacks that come to feed on the silversides. The wall has large stands of black coral and orange elephant ear and tube sponges. Pelagics such as eagle rays and sharks are frequently seen just off the wall.

Cracked Coral Head: This massive coral head rises 40′ off the bottom. Several large swim-thruoughs make it look like it is cracked giving it the name.

Jeep Reef: This site named for a coral-encrusted jeep that sits near the mooring is in the middle of the Exumas Land & Sea Park and hosts a healthy population of fish. It is also one of the prettiest reefs you will ever see. Current that sweeps through this cut keeps the reef ‘s corals healthy.

Pillar Wall: One of many excellent wall dives. It starts at 30′ and slopes to 50′ before dropping 5,000′ to the bottom. There are many caves and crevices. There is also a large colony of yellowhead jawfish in the rubble inside the reef.

Cave Rock: A large coral mound in 50′ of water surrounded by several smaller coral heads. There are several caves where you can swim from one side to the other. The large variety of corals and fish will amaze you. Hammerhead sharks have been seen here frequently.

Monolith: Large mounds of coral rise out of the sand at the edge of the wall. They start at 100′ depth and rise to 55′. There is a colony of garden eels in the sand next to the mounds.

Cave Reef: This 40′ shallow patch reef has several large swim-throughs cutting in the middle of the reef.

Empress Pinnacles: This wall dive features 30′ high pinnacles coming out of the sand at the edge of the wall. Pelagic animals are seen frequently in the clear water off the wall. There are large branches of black coral growing on the sides of the pinnacles.