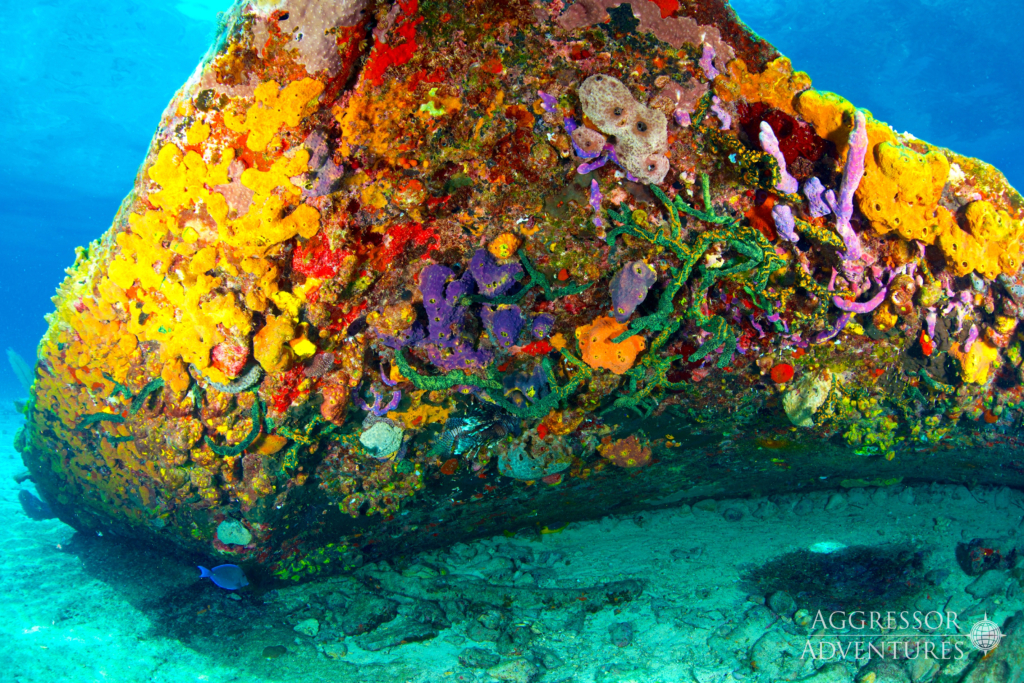 *Night diving is not included at Tiger Beach. 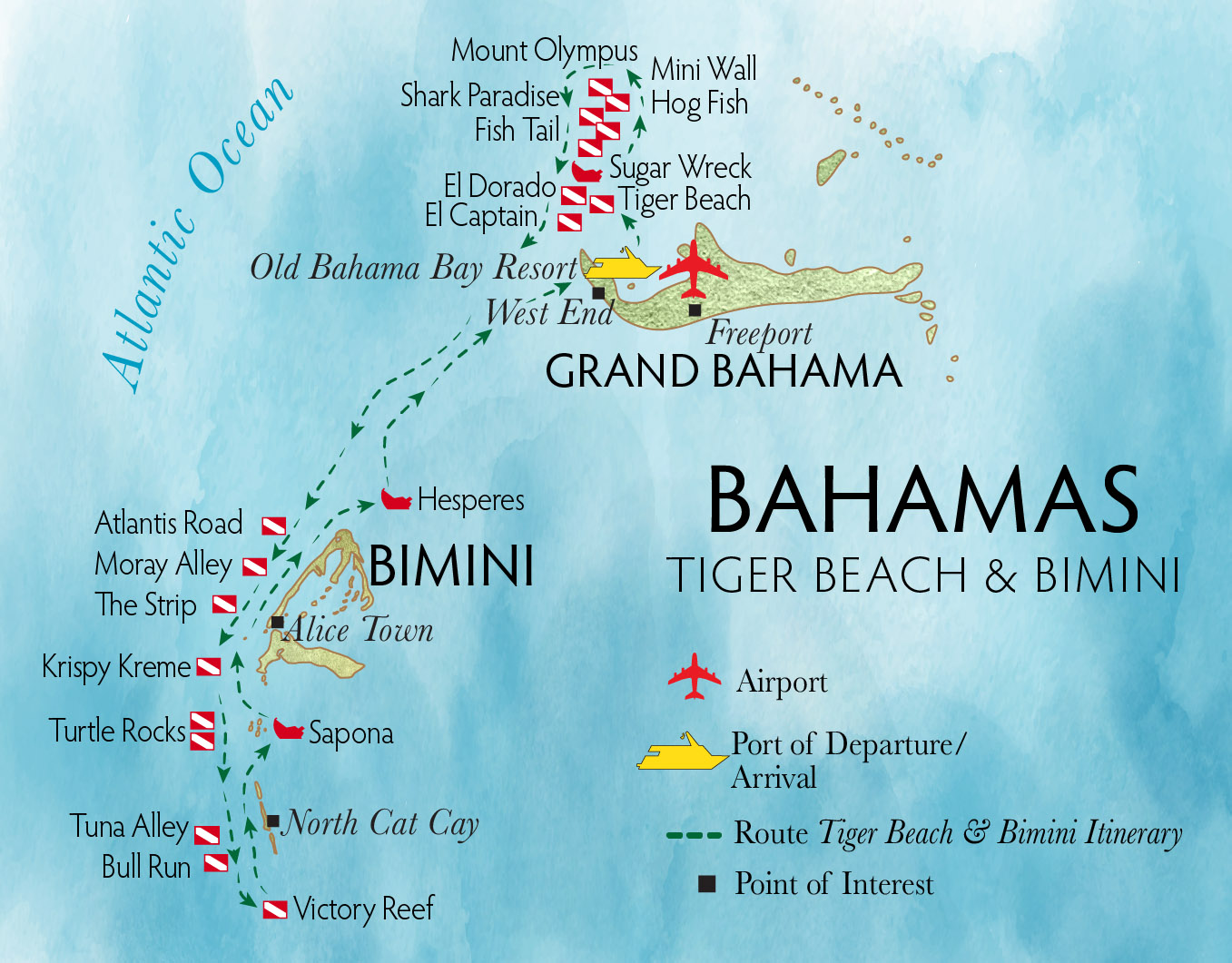 This unique 10-night itinerary to Tiger Beach and Bimini offers the best of both of these destination – both large (sharks and dolphins) and small (grouper, snapper, assorted other reef fish). At least one afternoon during the trip will be dedicated to a dive at the area known as “Tiger Beach”.  Both Caribbean Reef sharks, Lemon Sharks and Tiger sharks are known to frequent the area. 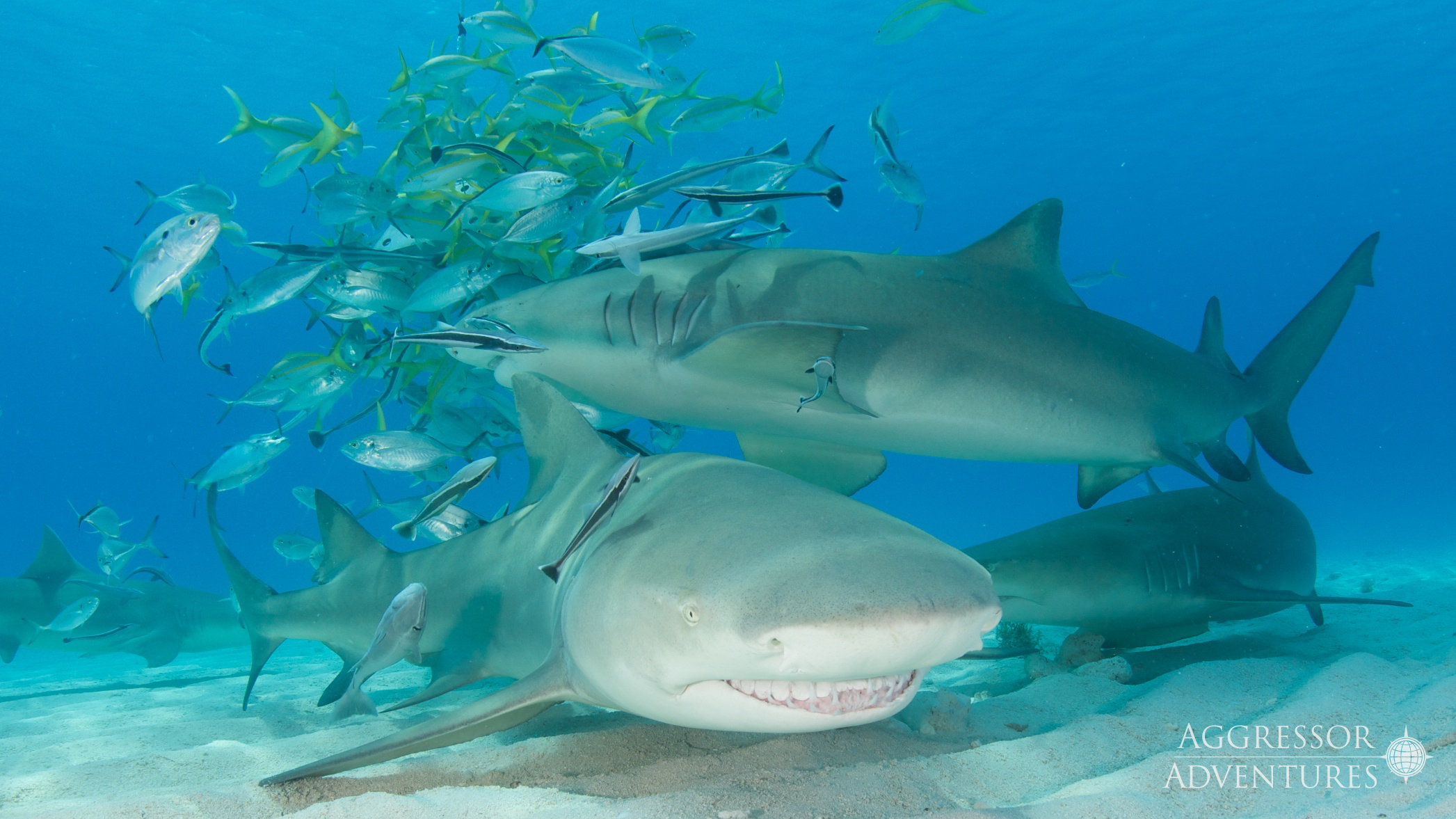 Hesperes: A shallow wreck covered with schools of Jacks, Snappers, lots of Angelfish, Eels, Groupers, sometimes Cobia, Nurse Sharks and Turtles. Also known as the Stingray Wreck because of the number of Stingrays you can see in the sandy areas around the wreck.

The Strip: A long strip of coral reef siting in about 45 feet of water. Schooling Fish, Crabs, Eels and at night usually several Green or Hawksbill Turtles.

Moray Alley: A large patch reef where you can easily find Crabs, Lobsters, a variety of Marine Life including lots of Eels, mostly Spotted or Goldentail Eels.

Tuna Alley: A fantastic wall dive where we normally see larger marine life such as Mackerel, African Pompano and some Tuna.

Turtle Rocks: Shallow Reefs with Colorful Coral Heads. Here we can easily see lots of Groupers, Angelfish, Eels, Wrasses and even a Turtle or two in the later afternoon.

Sapona: The Sapona is a Wreck sitting off the coast South Bimini. A lot of the structure sits above the water and the underwater parts are covered with Marine Life. Easily see Gobies, Chubs, Grunts, Groupers, Chromis, Angelfish, Mackerel, Turtles and at night Squid and Octopus.

Bull Run: Three Very Large High Profile Colorful Coral Heads that are located to where there’s a large sandy patch in the center almost like an arena. When swimming around the coral heads lots of Marine Life both large and small can be seen and photographed. We had Sharks mostly the Caribbean Reef Shark swam around us coming very close. When we do get a Bull Shark in the area for some reason the Reef Sharks don’t hang around as much. With the Colorful Coral Heads all the Marine Life and Sharks around it’s easy to spend the day at this one site.

Krispy Kreme: This wall dive earned its name the easy way it’s just a Beautiful Wall Dive full of Marine Life. When divers first started coming to this site, after the dive most would say, ‘that was Sweet” and Krispy Kreme was born.