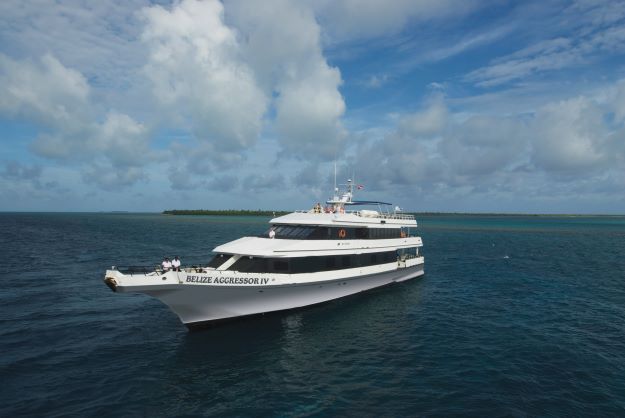 Every Saturday at 6 pm, the luxurious Belize Aggressor IV® casts off for liveaboard scuba diving from the Radisson Ft. George dock located in the heart of downtown Belize City. 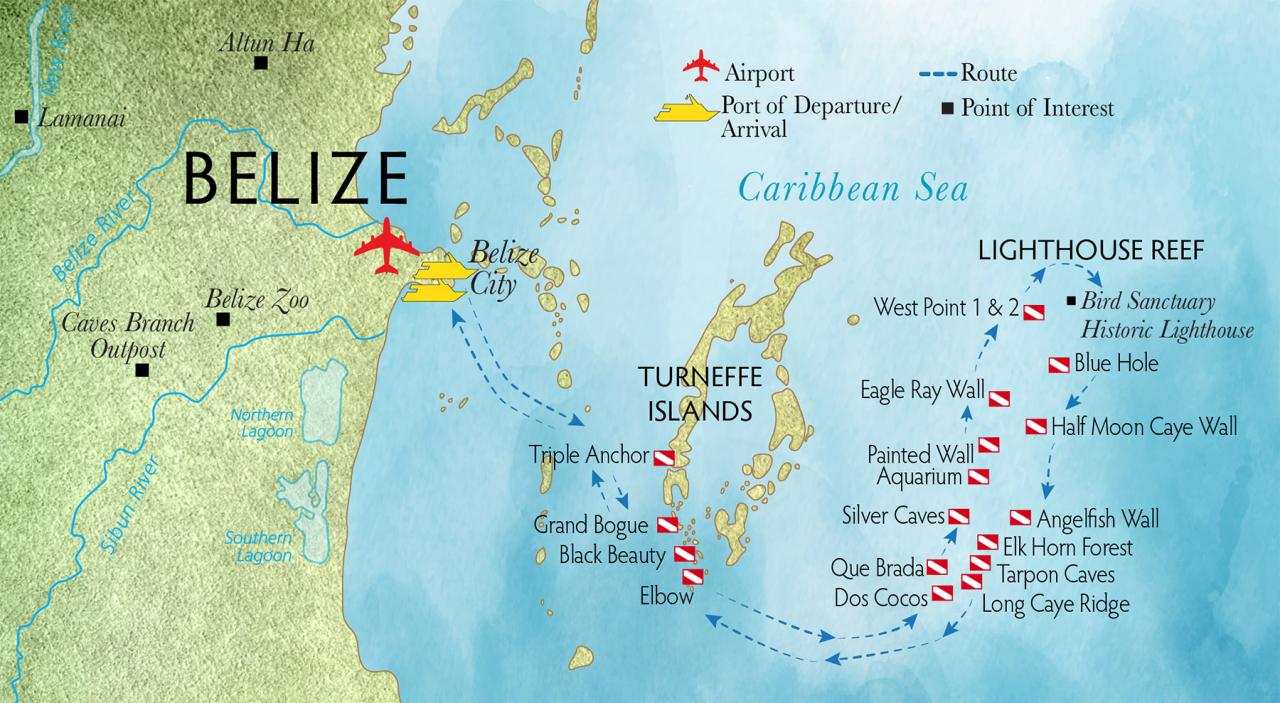 Angel Fish Wall:  Friendly grey angel fish give this site its name. The top of the wall teems with small fish. Eagle rays and an occasional shark also cruise the wall.

Aquarium:  A sheer drop-off begins around 30’, with an abundance of fish life at the top. About 40’- 60’ deep along the wall are large baffle sponges, giant, deep-water sea fans, and the richest collection of deep-water gorgonians almost anywhere in the world. Giant elephant ear sponges, yellow tube sponges, and azure vase sponges make this a very colorful area. Comical groupings of spotted truck fish are often seen on top of the wall, and the corner of this reef is a good place to see reef sharks, big black groupers, swirling schools of horse eyed jacks and hawksbill or green sea turtles.

Black Beauty:  Known for sightings of turtles and eagle rays, this area features long mounds of coral with sandy bottom channels. The wall begins around 50 feet. 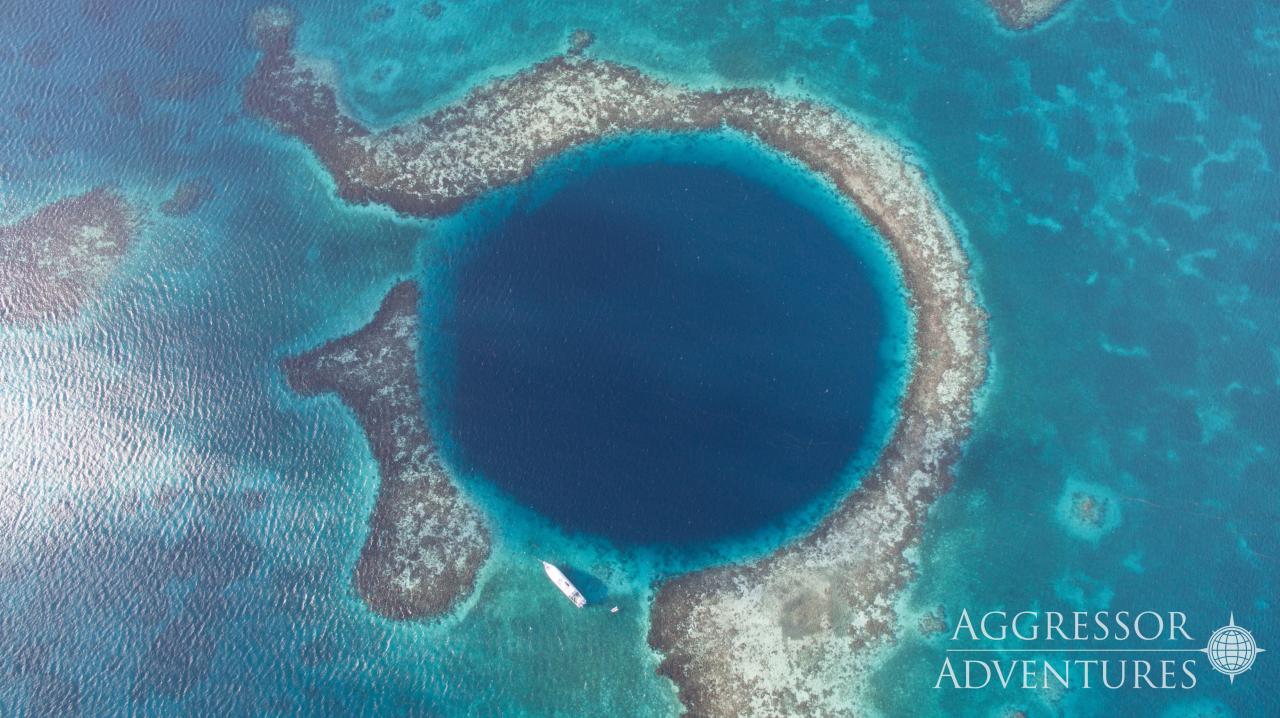 Blue Hole:  A collapsed freshwater cave system approximately 1000 feet across and over 400 feet deep, the Blue Hole was made famous by ocean pioneer Jacques-Yves Cousteau who declared it one of the top ten dive sites in the world. In 1971, he brought his ship, the Calypso, to chart its depths. Once descended into the Blue Hole, guests will see beautiful vertical stalactite formations. The first shelf of this collapsed underground cavern begins at 110 feet. Here stalactites descend from the ceiling. A healthy reef exists around the edge of the blue hole and is home to an abundance of juvenile sea life, as well as schools of parrot fish, squid, flaming scallops and angel fishes. These shallows are great for diving or snorkeling.

Cathedral:  Colorful formations resembling cathedral steeples with sandy cuts in between them signify this site. This site is home to many black groupers and jacks, as well as three species of angel fishes, scorpion fishes, several varieties of eels and silver sides. Spanish dancers are sometimes sighted on the night dives.

Eagle Ray Wall:  This site is known for more arrow blennies than you will probably see anywhere else, plus loads of decorator crabs.

Elbow:  This advanced dive boasts one of the best opportunities to see large pelagics such as eagle rays and reef and hammerhead sharks. Strong currents are often present. 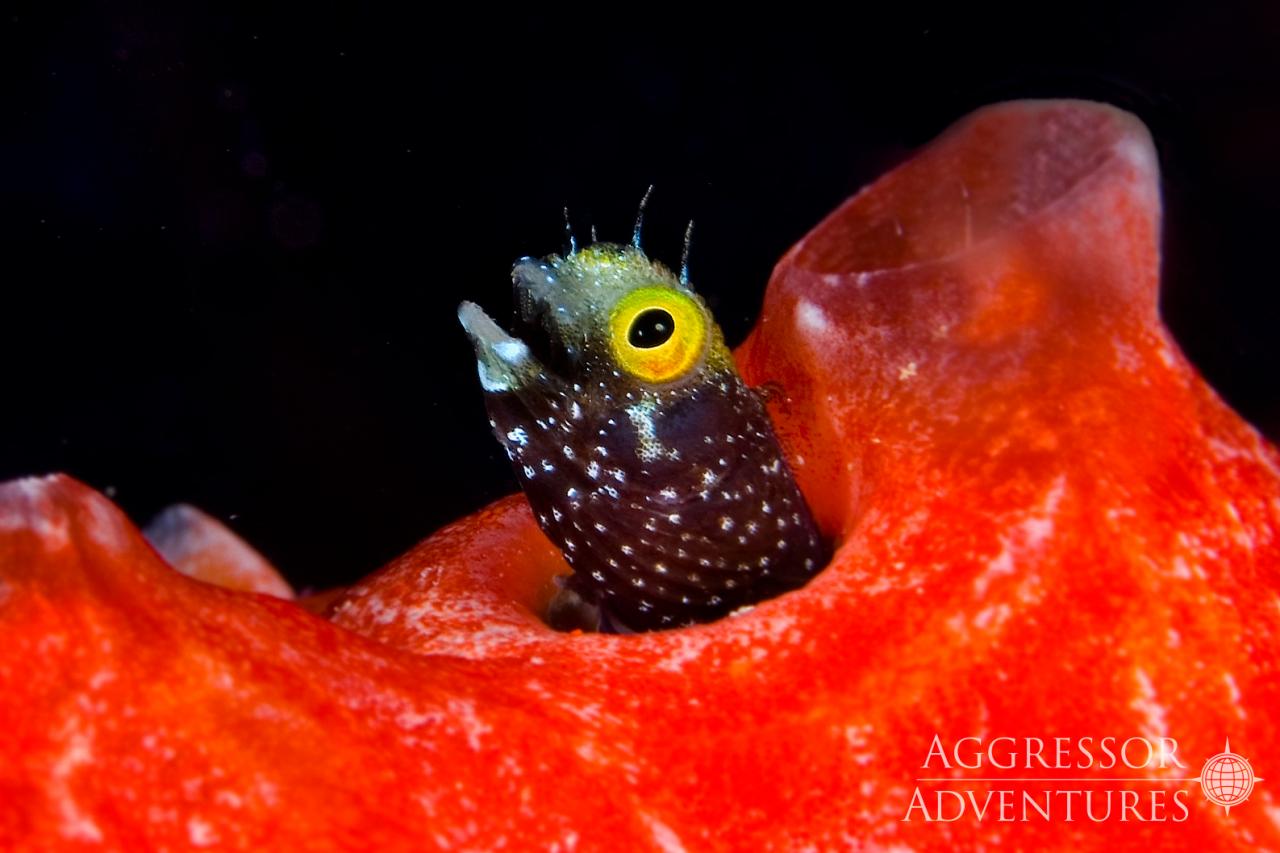 Elk Horn Forest:  Located on the east side of Long Caye, the shallows grow large mounds of lettuce leaf coral that project towards the depths. In the shallows are rare elkhorn corals inhabited by juvenile fishes of many species.

Grand Bogue:  This site is home to the elusive white-spotted, white-lined and large-eyed toadfishes.

Half Moon Caye:  Weather permitting, the Belize Aggressor III® anchors just off the caye. Guests are shuttled to the island and enjoy a relaxing walk along the beach to the bird sanctuary. Here you can observe red-footed booby birds and frigate birds from the observation deck built into the tree-top canopy. Located on the east end of the island is an historic lighthouse built in 1848, which is the lighthouse for which the atoll is named. The guests may have the opportunity to snorkel with several nurse sharks around the docks of this tropical island.

Half Moon Caye Wall:  Marked by tunnels and grooves that slope down toward the open water, several different species of grouper and snapper can be seen in the tunnels. Just off the wall, one can spot eagle rays, sharks, and turtles.

Long Caye Wall:  This site is named for a protruding ridge of reefs and numerous swim throughs with grooves that cut the wall running directly to the open sea. Interesting soft corals and sponges are abundant here, and many eels are found here as well.

Painted Wall:  Here divers will find many clusters of small painted tunicates between the depths of 40 – 70’. These walls have shallows inhabited by species of parrot fish, black durgeon, queen trigger fish, and many more. The sheer walls begin around 25’ and are overhung in many places with black coral trees and rope sponges covered with light-bulb tunicates.

Que Brada:  Named for a cut in the reef (between the wall and shallows), this is an extremely sheer and active stretch of wall. Because it projects out into the current, the extra flow of plankton around it supports an incredibly rich diversity of marine animals. Green moray eels, spotted drum, lobster, crabs, and tarpon are seen on the night dives.

Silver Caves:  The large swim through is frequently inhabited by thousands of silver sides, and the vertical wall starts in only 35’ of water. Lots of big black groupers collect under the boat, as do the ubiquitous school of horse-eyed jacks, yellow tailed snappers, and Creole wrasses.

Tarpon Caves:  A tall reef buttress rises straight up from the whitest powder sand to within 30’-35’ of the surface and is honeycombed with caves and cuts. This vertical wall is covered with huge yellow tube sponges, black coral trees, and monster barrel sponges projecting from the many small ledges. The sand areas are rich in garden eels, midnight parrot fish, razor fish, and southern stingrays. Tarpon patrol the inside edge of the reef. This dive site features several tunnels and chimneys in which tarpon and grouper like to hide. 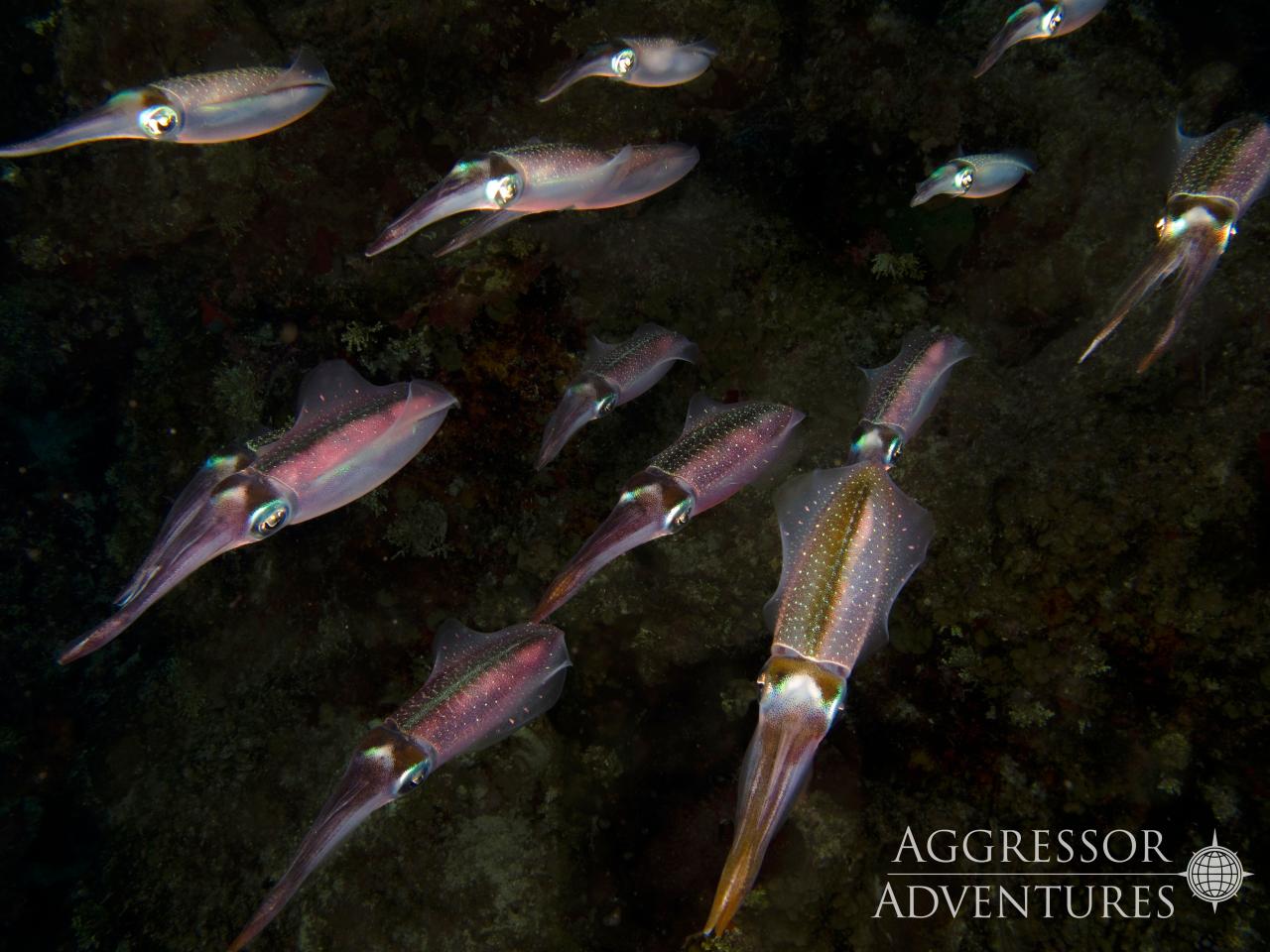 Triple Anchor:  Three anchors are very well hidden on a beautiful reef in 45’ of water. Look for big barrel sponges, eagle rays, and a cleaning station.

West Point 1 & 2:  The visibility at these sites is highly dependent on winds and tides, but the labyrinth of reef buttresses makes this site great even when visibility is diminished. The walls are vertical and start in only 20’ – 25’ of water. Black coral and deep-water gorgonians abound, as do giant barrel sponges and red finger sponges. You are likely to see mangrove tunicates here. The shallow sandy area is alive with garden eels, peacock flounders, and southern stingrays. In the sandy areas, blue-throated pike blennies can be found.

Sample itineraries and maps are for illustrative purposes only. The exact route and sites visited are subject to change based on local regulations, guest experience, weather and logistics, and is at the Captain’s discretion.